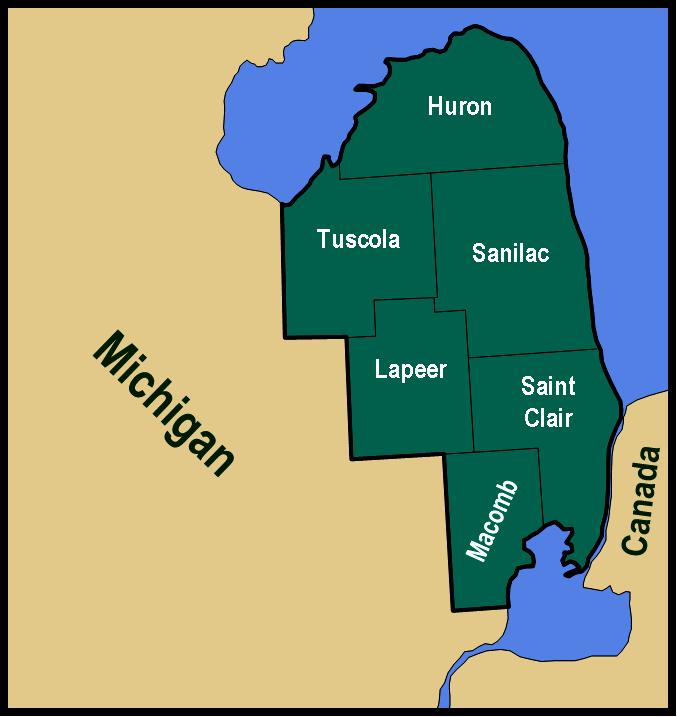 Where the TLC works

The TLC is working to preserve natural areas in the Thumb region of Michigan, a post-glacial landscape where northern forest blends with central hardwoods, bordered by Lake Huron, the Saginaw Bay, the Saint Clair River, and Lake Saint Clair. The TLC mission territory is Saint Clair, Sanilac, Huron, Tuscola, Lapeer, and Macomb Counties, but we may also work in adjacent areas as opportunities arise.

The Thumb Land Conservancy (TLC) was formed in 2008 to provide an organization dedicated to filling the gap of natural area preservation in Michigan's Thumb. Although much attention has been given to a few areas near Lake Saint Clair and along Saginaw Bay, the interior of the Thumb has been largely ignored.

There is a general misconception that little is worth saving north of Detroit because of urban development and agriculture. While much of the landscape has been drastically altered, many high quality natural areas remain. Some habitats are nearly pristine, resembling conditions that existed before European settlement about 200 years ago.

Regardless of condition, the extensive destruction makes preservation even more critical in the Thumb. Small, degraded habitat fragments can be restored and expanded, and often serve as isolated havens for rare plant species. We believe all natural landscapes are important locally because they reflect a unique combination of history and features particular to that location. Many benefits of nature are obtained and enjoyed only locally. We believe it is especially important for children to have natural areas nearby where they can play, grow, and learn.

TLC is carrying on a tradition in the Thumb. In 1952, Macomb and Saint Clair Counties were the birthplace of what became the Michigan Nature Association (MNA), the first statewide land preservation group in Michigan. MNA was led for many years by the late Bertha Daubendiek of Kenockee Township in Saint Clair County, and is one of the few organizations that has protected land in the Thumb, with 18 sanctuaries here.

The Dead End Woods Sanctuary was acquired by TLC from the Saint Clair County Drain Commissioner, Fred Fuller, in December 2008. As a condition for obtaining a wetland permit from the Michigan Department of Environmental Quality for the Huffman Drain and Bunce Creek drain project, Fred agreed to preserve nearly 12 acres of wetland in the Dead End Woods as mitigation by placing a conservation easement on the property. As mitigation options were being considered, the owner of one of the Dead End Woods parcels approached Fred with an offer to sell the land at a reasonable price. The MDEQ confirmed the presence of a large amount of wetland on the property and found that it is a high quality habitat. Fred then acquired adjacent land with additional wetland to fulfill all of the mitigation for the current phase of the drain project. As a means of satisfying MDEQ requirements for long-term monitoring and stewardship of the wetland, the two Dead End Woods parcels were then transferred to the TLC, relieving the Drain Commissioner from further responsibility for this land.

One of several Spikenard.

On July 16, 2009, the TLC acquired its second nature sanctuary, the Gerrits Sanctuary, a generous donation from Lois Gerrits, the widow of the late Dr. James F. Gerrits. The closing was held at the Law Offices of Timothy J. Lozen, with attorney Anna Kovar and TLC executive board members William Collins and Terry Gill present. Ullenbruch Flowers and Gifts of Port Huron kindly donated a nice bouquet of flowers to express our appreciation to Mrs. Gerrits.

The Gerrits Sanctuary is 38.5 acres of southern mesic and southern swamp forest with old-field to the north. Crapaud Creek flows through the north end of the property, which is located only about ¾ mile north of Anchor Bay and Lake Saint Clair. Such coastal habitat is critical for migratory birds and insects that move along the Great Lakes.

The sanctuary is located along the east boundary of the City of New Baltimore and Macomb County in Ira Township, Saint Clair County. Although development has taken a toll on nearby land, the forest on the sanctuary is mature, contains many high quality woodland species, and is part of what appears to be the largest and least fragmented forest tract remaining along the Great Lakes coastline from Ohio north through the Algonac area, excluding Grosse Ile near Detroit, and Walpole Island on the Ontario side.

Dr. Gerrits was well known in Saint Clair County. He was co-pilot of a bomber in World War II, and later a fighter and test pilot. Because of his war experiences, he became an outspoken critic of war. He and Lois twice voluntarily went to Vietnam in the 1960’s, sponsored by the U.S. Department of State and Catholic Church, to provide civilian medical care to the people of both South and North Vietnam. Lois shared several stories about those times after our closing. The TLC will feature more about Dr. and Lois Gerrits in the future.

On June 28, 2010, the TLC acquired its third preserve, the 11.5-acre Peltier Beach Ridge Sanctuary in Fort Gratiot Township, Saint Clair County. The sanctuary is located south of Metcalf Road, along the east side of the Detroit Water Board property. The parcel was given to the TLC by Ray and Nancy Peltier to satisfy State of Michigan wetland mitigation requirements for an expansion of the Hamzavi Dermatology office in Fort Gratiot. As with our first preserve, the Dead End Woods Sanctuary in Fort Gratiot, the Peltier Beach Ridge Sanctuary is protected by a State of Michigan conservation easement. In accepting ownership of the mitigation property, the TLC agreed to be responsible for all monitoring, management, and long-term stewardship.

The Peltier Beach Ridge Sanctuary is a high quality wetland and upland complex with a unique geologic history, unique plant and animal community, significant Great Lakes coastal habitat, good restoration potential, and a great addition to the TLC preserve lands. The sanctuary is a small part of a much larger and ecologically unique beach ridge and swale landscape, a long, narrow formation within about 1 mile of the Lake Huron shoreline, extending from Port Huron into Sanilac County. The landscape began forming about 11,500 years ago as the last stages of the Wisconsinan glacier melted back and early Lake Huron was about 30 feet higher than today. About 1,500 years later, the melting glacier uncovered a new outlet from the Georgian Bay and the water dropped over 400 feet. The massive weight of glacial ice depressed the earth’s crust for thousands of years, but as it melted, the crust slowly rose and continues today. By 4,500 years ago, the drainage outlet from Georgian Bay raised such that early Lake Huron filled to the Lake Nipissing stage and back to the old shoreline of 7,000 years previous. Great Lakes drainage was gradually limited to the Mississippi River through the old Chicago outlet, and then to the Saint Clair River which rapidly down-cut and lowered the Great Lakes to modern levels, leaving a series of beach ridges as the water dropped.

The landscape consists of a series of mostly forested upland sand ridges and mucky wetland troughs or swales between. In Saint Clair County, the sand ridges average about 40 to 50 feet wide and 3 to 4 feet above the adjoining swales. The swales are usually about as wide as the ridges, but some are a few hundred feet wide. The beach ridge and swale landscape provides not only unique habitat, but also a record of Michigan’s post-glacial past.

On the Peltier Beach Ridge Sanctuary, wetland swales are covered by Silver Maple, Green Ash and Black Ash, the larger ash trees now all dead due to the Emerald Ash Borer, Eastern Cottonwood, and American Elm. The upland beach ridges are covered largely by Black Cherry, Bigtooth Aspen, and American Basswood, with scattered Black Oak, possibly hybridized with Northern Pin Oak, and a few Northern White-cedar. The lower ridge bases are lined with Paper Birch and covered by an unusual concentration of Alternate-leaved Dogwood.

Unique species on the sanctuary include Purple-flowering Raspberry, Yellow Lady’s-slipper orchid, and the Eastern Hog-nosed Snake. Purple-flowering Raspberry is the Lower Peninsula’s equivalent of the Upper Peninsula’s Thimbleberry, thought to be native to only 7 shoreline counties in Michigan. Yellow Lady’s-slipper orchid grows in a variety of habitats, but in Saint Clair County is largely restricted to the moist ridge bases and mucky swales of this landscape. The Eastern Hog-nosed Snake is a special reptilian inhabitant that prefers the more open sand of dunes and disturbed ground such as along the south end of the sanctuary. When aggravated, the snakes flatten their necks like a cobra, and then sometimes rolling over and play dead with their mouths hanging open. They can look imposing, but are harmless.

One of the most critical functions of this coastal forest habitat is the support it provides to an abundance of migratory birds as they move north and south along the Lake Huron shoreline. The spring and summer breeding bird population is very abundant and diverse in this area, especially the forest warblers. Several species of warblers have been identified on the Peltier Beach Ridge Sanctuary.

The beach ridge and swale landscape in Fort Gratiot and Burtchville Townships. 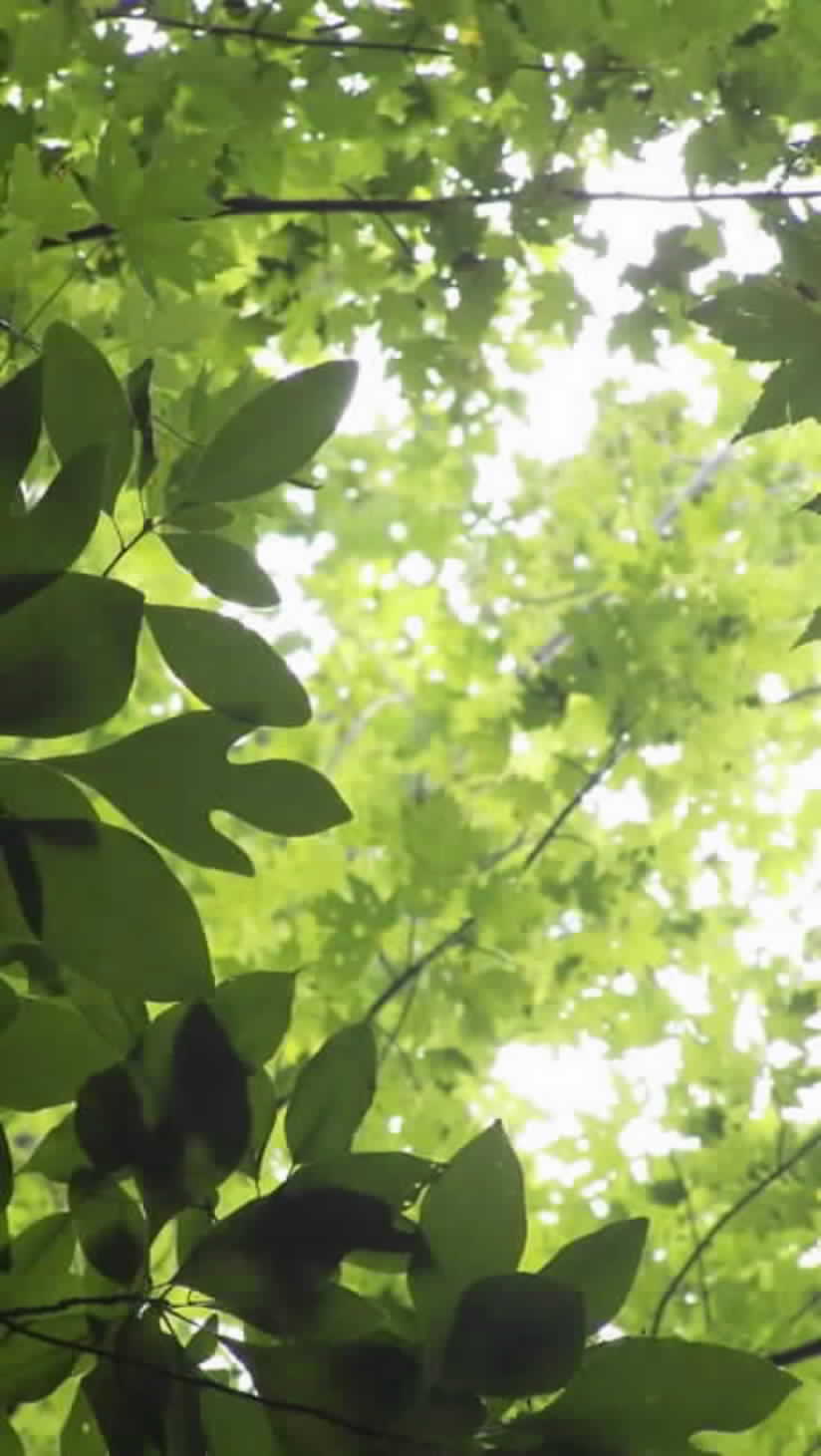 The spring and summer of 2015 was busy for the TLC. With the help of Professor Carrie Dollar and Professor David Webb of the Biology Department at Saint Clair County Community College (SC4), we recruited four student interns to assist with preserve stewardship and gain valuable experience in ecology.

Our first intern was Alex Roland. She was with us from May through August and is now at Michigan State University pursuing a degree in wildlife biology. Alex’s first activity was our May 01 burn on the Michigan Road Preserve that we manage for Saint Clair County. On May 15 we surveyed potential habitat on the Michigan Road Preserve for Michigan Endangered Painted Trillium. We didn’t find any, but we saw it on the nearby Michigan Nature Association Jasper Woods Sanctuary and Alex was introduced to several other native woodland plants. On May 16, Alex and her mother helped us pull Garlic Mustard at the Dead End Woods Sanctuary.

By June, we gained three additional interns; Jeff Hansen, Nicole Barth, and Sarah Mensinger. Jeff is studying environmental science at Oakland University. Nicole is studying biomedical science at SC4. Sarah is now at Western Michigan University studying freshwater ecology. Alex, Jeff, and Nicole assisted us in collecting vegetation data at the Michigan Road Preserve as part of our annual monitoring for Saint Clair County. In August, we worked together on a special project, weeding the parking lot rain gardens at SC4 in preparation for additional native wetland seeding. On August 27, Sarah represented the TLC at the Back to School Bash, a gathering of school kids at White Park in Port Huron, sponsored by Diverse Unity Outreach Center.

Maggie Dollar, daughter of Professor Carrie Dollar, has contributed her excellent writing skills to the TLC. In July she sent us an article about the Kirtland’s Warbler which is posted in this blog. Maggie and her mother have also been writing a rough draft of a guide for Thumb landowners wanting to promote native species on their property. We hope to see more of Maggie’s writing in the future.

If anyone is interested in helping the TLC, we have work for you. We provide unique opportunities to learn about nature and assist in protecting some of our remaining natural areas.